Post-processing methods in OCT structural and functional imaging are mainly implemented using signal-agnostic traditional image processing approaches, and more recently, machine learning approaches. Examples of the former include prevalent averaging in methods that are negatively affected by speckle, such as polarization-sensitive OCT and spectroscopic OCT. Examples of the latter include machine-learning despeckling and angiography.

We are developing a third category of post-processing methods based on the physics of the light scattering and OCT image formation, making use of statistical methods to make improved estimates of the physical parameter of interest. These methods are capable of significantly improving image quality and accuracy compared to traditional image processing methods, while being universally applicable due to their non-reliance on any kind of training data.

Our first probabilistic method was the despeckling algorithm TNode [1] (Tomographic Non-local-means Despeckling), inspired by advanced despeckling methods developed in synthetic aperture radar. We have demonstrated that TNode is very efficient at reducing speckle contrast, while preserving the resolution of the original tomogram. The figure below shows a single en-face plane of a retinal OCT scan at the fovea before and after using TNode.

We are currently developing probabilistic Stokes tissue polarimetry post-processing, for use with PS-OCT systems that use two incoherent input polarization states, such intravascular PS-OCT systems using inter-A-line modulation. The figure below shows an exemplary cross section acquired in a pilot clinical study, processed with conventional and probabilistic methods. 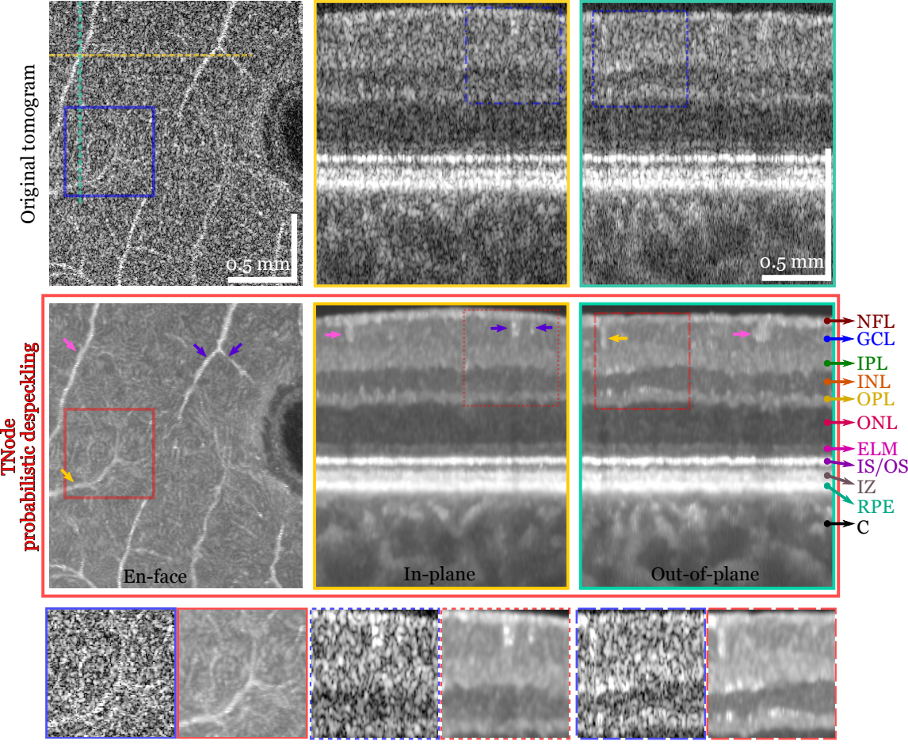 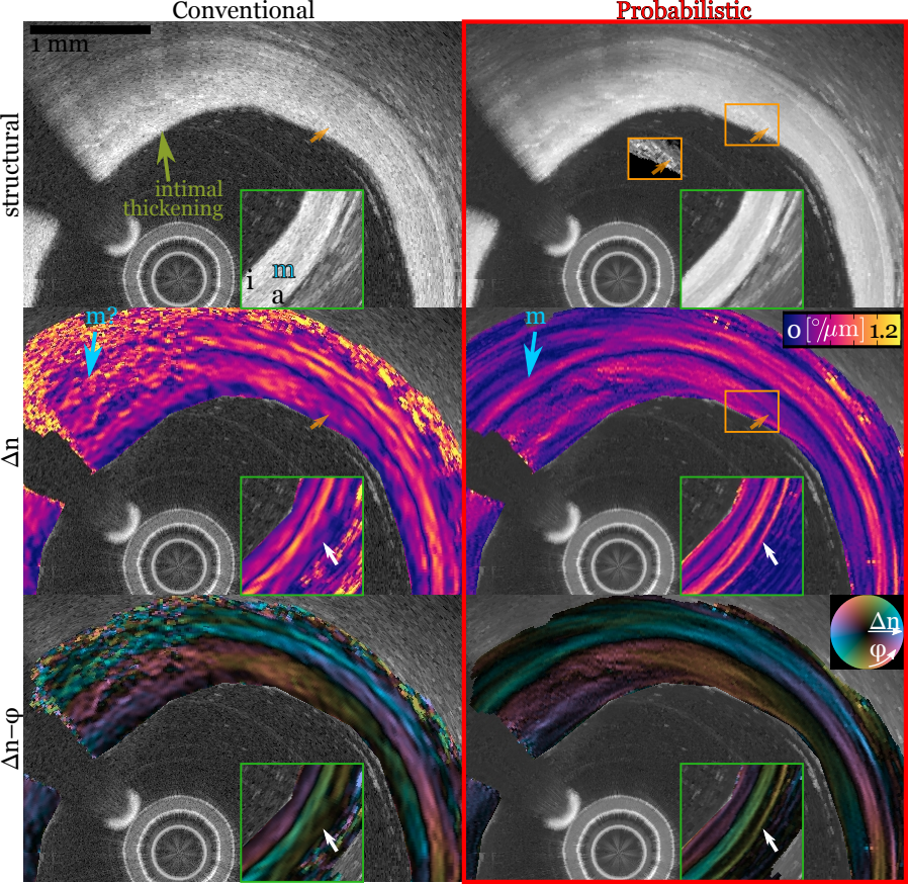 Probabilistic tissue polarimetry dramatically enhances spatial resolution in intravascular OCT. IV-PS-OCT imaging of intimal thickening in a patient. Vessel wall is composed of intima (i), media (m) and adventitia (a) layers, media being the most birefringent. Birefringence (Δn) given in º/μm, in-plane optic-axis angle (φ) visualization “Δn–φ” is a luminance(Δn)–hue(φ) overlay (not corrected for catheter rotation).72 Probabilistic Stokes processing shows significant preservation of spatial resolution and higher immunity to photonic noise. The media layer birefringence and optic axis appear more uniform, even in the region (blue arrow) where they are lost in conventional processing. The green inset box shows a region (at 4 o’clock, outside of main image) where a thin strip of high birefringence is seen in probabilistic processing, matching the boundary between adventitia and peri-adventitial region. The spatial distribution of birefringence inside the intimal thickening is also more consistent with the subtle intensity changes seen in the structural image (orange box and arrow, orange-box inset shows contrast-enhanced intensity).